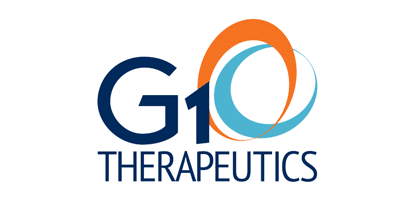 “G1T38 inhibits tumor cell growth, providing a rationale for combining it with other targeted therapies, including EGFR-TKI inhibitors such as Tagrisso. In a prior Phase 1a trial, G1T38 had no dose-limiting toxicities and was well tolerated with no impact on liver or cardiovascular function, presenting evidence of a favorable safety and tolerability profile for combination therapy,” said Raj Malik, M.D., Chief Medical Officer and Senior Vice President, R&D of G1 Therapeutics. “Despite advances in care, lung cancer remains the leading cause of cancer death globally. Non-small cell lung cancer represents the majority of lung cancers, and there is a significant need for new treatment options that improve outcomes for people with this disease.”

“There is a growing body of evidence that CDK4/6 inhibitor combination regimens can be effective in a range of tumor types. In addition to this trial in lung cancer, we are conducting a trial of G1T38 in combination with Faslodex in people with ER+, HER2- breast cancer. Preliminary Phase 1b data from that trial will be presented in the second quarter,” said Mark Velleca, M.D., Ph.D., Chief Executive Officer of G1 Therapeutics. “We are excited about G1T38’s best-in-class potential and believe that it could be backbone therapy for combination regimens across multiple solid and hematological malignancies.”

About G1T38
G1T38 is a potential best-in-class oral CDK4/6 inhibitor being developed for use in combination with other targeted therapies in multiple oncology indications. Preclinical data presented at the American Association for Cancer Research 2016 Annual Meeting and published in Molecular Cancer Research and Oncotarget demonstrated the compound’s differentiation from other CDK4/6 inhibitors.

About Tagrisso
Tagrisso, developed and commercialized by AstraZeneca, is a third-generation, irreversible EGFR-TKI designed to inhibit both EGFR-sensitizing and EGFR T790M-resistance mutations, with clinical activity against central nervous system (CNS) metastases. Tagrisso received Accelerated Approval for EGFR T790M mutation-positive advanced non-small cell lung cancer (NSCLC) in 2015 and full approval in 2017. The U.S. Food and Drug Administration is currently reviewing Tagrisso as a 1st-line treatment for EGFRm NSCLC under Priority Review.

About Faslodex
Faslodex, developed and commercialized by AstraZeneca, represents a hormonal treatment approach that helps to slow tumor growth by blocking and degrading the estrogen receptor – a key driver of disease progression. Faslodex is indicated for the treatment of estrogen receptor positive, locally advanced or metastatic breast cancer in postmenopausal women not previously treated with endocrine therapy, or with disease relapse on or after adjuvant anti-estrogen therapy, or disease progression on anti-estrogen therapy. Faslodex has also been licensed for use with CDK4/6 inhibitors, palbociclib (in the U.S., EU and several other markets) and abemaciclib (in the U.S. only) for the treatment of women with ER+ / HER2- advanced breast cancer, whose cancer has progressed after endocrine therapy. In Japan, Faslodex is also approved for use in combination with any CDK4/6 inhibitor.

About G1 Therapeutics
G1 Therapeutics, Inc., is a clinical-stage biopharmaceutical company focused on the discovery and development of novel therapeutics for the treatment of cancer. G1’s two clinical assets, trilaciclib and G1T38, are CDK4/6 inhibitors, a validated and promising class of targets for anti-cancer therapeutics. Trilaciclib and G1T38 have broad therapeutic potential in many forms of cancer and may serve as the backbone of multiple combination regimens. In addition, G1 is advancing G1T48, a potential first- / best-in-class oral selective estrogen receptor degrader, or SERD, which is targeted for the treatment of ER+ breast cancer.

G1 is based in Research Triangle Park, NC. For additional information, please visit www.g1therapeutics.com and follow us on Twitter @G1Therapeutics.